The experts of Eco Mosaic were commissioned by the Ministry of Environment and Physical Planning – the National POPs Office, to participate in the preparation of an updated National Inventory of POPs in Macedonia in accordance with the requirements of the Stockholm Convention, focusing on new POP industrial groups of chemicals:

в) Pentochloro-benzene (PeCB) – which also belongs to the group of pesticides.

The aim of the Stockholm Convention is to protect human health and the environment from persistent organic polluters (POPs). The Convention lists twelve POPs which were/are used or are released at industrial reactions in different sectors: industry, agriculture, waste management etc.

During the implementation of the Project “Enabling Activities to Facilitate Early Action for Implementation of Stockholm Convention on Persistent Organic Polluters” launched in 2012, MOEPP /the National POPs Office implemented activities for recording/inventarization of persistent organic polluters in Republic of Macedonia (http://www.pops.org.mk), prioritized key challenges and prepared an Action Plan containing measures for reducing or completely eliminating POPs. 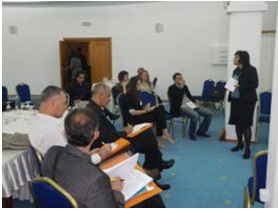 The team of Eco Mosaic participated in updating the Inventory for New Industrial POPs for 2012/2013 which includes the new industrial chemicals PBDEs and PFOS which in the past were used in developed countries when producing electronic and electrical equipment, in the transport sector and in various industries as surface active chemicals which improve the characteristics of products (galvanization, paper production, construction and insulation materials, textile production, carpets, fire fighting materials etc.).  In developing countries these chemicals are still produced, and they might still be used in our country. In our country expected is the presence of products (electrical and electronic equipment and waste electronic and electrical equipment, cars and other types of  vehicles) which were produced ten years ago when these chemicals were still used for their production.

The project is implemented in several phases by using newest techniques and methods for identifying the presence of new industrial POPs . All relevant actors, governmental institutions (State Statistical Office, Customs Administration of Republic of Macedonia, Public Health Institute, MOEPP, with representatives from sectors of waste management, legal regulations, financial implications, inspection supervision and other representatives from the industry) are involved in the project and contribute to identifying the presence of newest POPs, to verifying the preliminary inventories and prioritize key challenges.

Currently the Inventory and the Final Report on updating the Inventory with the new industrial chemicals and the Action Plan for undertaking measures for banning and mitigating the environmental impact from the use of these chemicals in our country are being prepared.