The expert team of the Engineering and Environmental science consultancy Company “Eco Mosaic” from Skopje until present has prepared several Environmental Impact Assessment Studies for projects of international organizations, planning regions/municipalities and the City of Skopje (Reference List).

The objective of the EIA Study is to determine and to assess all possible positive and negative environmental impacts which may occur during the implementation of the project as well as  to assess social aspects on local, regional and national level. The EIA Study ensures that project activities (in all phases: design, construction, operational phase and phase of termination of operation / dismantling of the equipment) will be carried out ensuring environmental and social aspects protection and are also in agreement with the national legislation and the best international practices.

When developing the EIA, the expert team of Eco Mosaic constantly communicates with the developers and with the 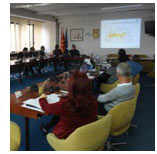 competent institutions, thus coordinating project implementation activities; visits the relevant locations and their surroundings and determines which are the sensitive elements of the environment which would be most exposed to negative impact arising from the implementation of the project; proposes a plan containing measures for preventing, reducing and mitigating the environmental impact, proposes a plan for monitoring the implementation of measures, attends public debates and leads the developers through the entire process of implementing the procedure for carrying out the Environmental Impact Assessment.

After the need for EIA is determined, the developer submits a Letter of Intent for implementing the project to the MOEPP.  The EIA   is carried out by authorized experts in accordance with a predetermined methodology, reporting structure and documents.  During the procedure the public participation is obligatory. 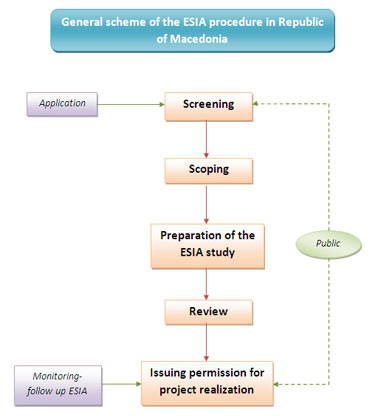 EIA procedure in Republic of Macedonia

The process for developing an EIA Study consists of several steps, which are as follows: